Today the U.S. Federal Government was forced to shut down all non-essential services and activities, as Congress was unable to agree on a continuing funding resolution by the end of the budget year at midnight last night. Among the many agencies closing their doors this morning was our own Acadia National Park.

For anyone who has yet to figure it out, what we are seeing here is a high-stakes struggle between those who believe in a small, limited government, and who rely on free market systems to provide for the basic needs of the people, vs. those who believe that government has an important role to play in ensuring that people's basic needs are met, and that inevitable free market excesses or shortcomings are corrected. The government program currently being fought over is the Affordable Care Act, also known as Obama-care; a massive overhaul of our entire health care system.

To get even more basic – most people tend to like government services when those services are available to them. The problem is that they don't want to pay the taxes which are necessary to fund those services. Hence the unfortunate tendency to borrow for current services with the expectation that future generations will pay off the loan.

So far, our democratic system of government has been unable to handle and resolve these most fundamental issues, so we lurch from crisis to crisis with no good end in sight. There are many knowledgeable observers around the world who are becoming quite concerned that the United States is no longer able to govern itself, a situation that would have dire economic and social consequences for us all.

We here at MountDesertIsland.Net, probably like most Americans, come down somewhere in the middle on the proper role of government. A welfare state is not an appealing or effective option in the long run, because it tends to reduce the personal ambition and responsibility that enable a society to grow and prosper efficiently. On the other hand, unrestricted and uncontrolled free markets eventually result in imbalances that can undermine or even destroy a society. Leaving everyone to their own devices when resources are not evenly divided can lead to dysfunction and disaster.

So the loss we feel when our beloved Acadia National Park closes is symptomatic of a much larger and much more serious problem. In a properly functioning democracy, the ultimate solution to this larger and most fundamental problem should lie with informed, participating voters at the ballot box. But what happens when nearly half of the potential voters are neither informed nor participate? What happens when powerful special interest groups use huge sums of money to influence elections and our elected representatives for their own private gain? What happens when large segments of our society struggle to meet the day-to-day requirements of basic living, while a few others reap all the rewards of a privileged life?

We have a right to worry and be sad about the loss of access to our Acadia Park at this beautiful season of the year. But we have a much more important obligation to find a way to restore faith in our democratic system of government so our country can function, and so Acadia doesn't have to close again! 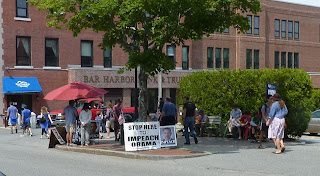 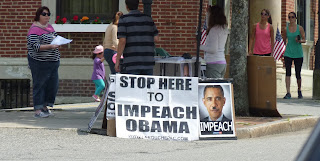 While in Bar Harbor this weekend, we could not help but notice a small, vocal group of demonstrators staffing a prominent display set up on the Main Street sidewalk and advocating the impeachment of President Obama. In addition to signage, there were large portraits of the President with a Hitler style mustache. Thousands of summer tourists were strolling the streets, and two cruise ships were in port. A brief inquiry indicated that the group apparently did have a permit from the Town of Bar Harbor.

Observing the demonstrators for a short time, we saw many people cross the street to avoid passing directly in front of the display and also to avoid any verbal contact with the activists. That likely made shop owners on at least one side of Main Street rather unhappy. We also saw demonstrators gesturing to, and verbally interacting with, people who were forced by heavy traffic to drive up or down Main Street very slowly. In fairness, there was the occasional person who intentionally walked over to the demonstrators voicing support, signing their petition, or donating money.

In our view, this incident raises some difficult questions that require a lot of careful thought. Of course, our first priority must be to preserve the First Amendment right of everyone to speak their mind, no matter how offensive that speech might be to some willing, or even unwilling, listeners. Still, we also are aware that millions of people visit Mount Desert Island and Bar Harbor every year to both marvel at the natural beauty of Acadia National Park, and to enjoy for a brief few days the small-town atmosphere of a coastal Maine village which they like to think is far removed from the frustrating extremism and debilitating negativism that have become so much a hallmark of our political system.

As other interest groups see or hear about demonstrations like the one this weekend, it is likely that they too will want to take advantage of Bar Harbor's high visibility and heavy summer traffic. We believe that the Bar Harbor Town Council, with input from the town's attorneys, local citizens, and the Chamber of Commerce, should carefully review any pertinent ordinances to be sure that the rights and interests of all parties are adequately protected.
Posted by Charlie - No comments:

Charlie -
My wife and I have lived year-round with our family on Mount Desert Island for some 35 years. We have 2 children who attended MDI schools and 6 grandchildren, four of whom currently attend MDI schools. All of us care very deeply about preserving this special place for future generations as the island and our nation face many social, economic and environmental challenges. Hopefully, MDI Blog will spark careful thought and meaningful discussion of these issues.